Haitian art is a complex tradition, reflecting African roots with strong Indigenous American and European aesthetic and religious influences. It is an important representation of Haitian culture and history. 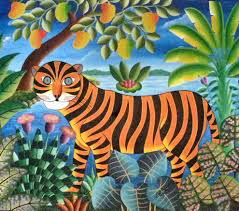 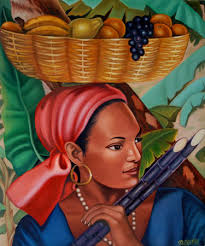 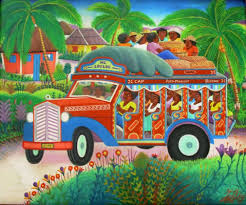 Haitian art is the beauty which displays views of typical African and French culture. Paintings along with sculptures are the essential types of this art. Haitian Art showcases lively colors.
Haitian Art includes a reference to the poverty and the limited programs within the exceptionally talented group of Haiti. This art type come into light in 1943 following DeWitt Peters realizing the great scope of Haitian Art becoming a source of livelihood for the diminished group of neighborhood Haitians.

Prefete Duffaut is one of the most prolific and famous painters of the so-called "Primitive" or "Naive" painting tradition in Haiti. This mini doc (4.5 minutes) was produced to accompany the ground-breaking exhibit of Haitian Art at the Brooklyn Museum in 1978.

1807-1818: Henri Christophe encouraged some artistic activity during this period.  1816-1818 : Two English artists are known to have taught at the Royal Academy of Milot.

1830-1860 : Thirty Haitian artists, some of them trained in France, were at work in Port-au-Prince and Cap-Haitien. 1850-1859 : Emperor Soulouque founded The Imperial Academy of Drawing and Painting in Port-au-Prince.

1930 : The American artist William Scott was working in Haiti and encouraged Pétion Savain to paint. A group of artists forms around him, some later join the Art Center. 1941: Founding of the Bureau and the Museum of Ethnology in Port-au-Prince.  1943 : Dewitt Peters arrives in Haiti. Contacts Horace Ashton, Director of the American-Haitian Institute, who opens an arts section.

1944 : On the 24th of February, Philomé Obin sent his first work as a member to the Art Center, The Arrival of President Roosevelt in Cap-Haitien. On the 14th of May, President Elie Lescot inaugurated the Art Center in Port-au-Prince. In May: First trip by Wifredo Lam to Haiti.

1945: José Gomez Sicre proposed an exhibit on modern Cuban art to Dewitt Peters. This exhibit was a real success. Exhibit by the Cuban Carlos Henriquez at Art Center. First exhibit of the Cuban Wilfredo Lam at Art Center. The 15th of September , an Art School was opened in Cap-Haitien under the direction of Philomé Obin and Hélène Schomberg. In December, André Breton came to Haiti for the first time and visited the Art Center. He wrote about Hector Hyppolite in Surréalisme et Peinture (1947).

1947 : Exhibit of Haitian Painters at Unesco in Paris. On the 12th of April, Dewitt Peters received the National Order of Honor and Merit Exhibit.

1948 : On the 13th Of February, André Breton visited the Art Center for the second time and bought twelve canvases by Hector Hyppolite. In May, Jasmin Joseph joined the Center. In June, the Rockefeller Foundation awarded study grants to three Haitian artists. In October , the Museum of Modern Art in New York bought works by Philomé Obin and Jacques Enguerrand Gourgue. During a stay in Haiti, the American artist Alex John encouraged Robert Saint-Brice to paint. Hector Hyppolite died.

1949 : Robert Saint-Brice and André Pierre joined the Center. Jean-Paul Sartre visited the Center. Order for the frescoes and sculptures for the Stations of the Cross and the choir rood-screen in Holy Trinity Cathedral in the Time Magazine.

1950 : In September, a group of fifty artists left the Center and founded the Foyer des Arts Plastiques. Pierre Monosiet became Assistant Director of the Art Center. Exhibit by Robert Wilson and Mary Coles at the Art Center.

1953 : in August Antonio Joseph received the first Guggenheim grant to be awarded to a Haitian artist.

1957 : The Issa El Saeih Gallery was opened to show work by the artists from the Foyer des Arts Plastiques. Vivian de Buren, a Swiss painter, settled in Haiti.

1958 : Opening of the Red Carpet Gallery in Petion-Ville. Opening of the Georges Nader Gallery*. Foundation of the Academie des Beaux-Arts with an Italian professor, Armerigo Montagutelli. Booz. Hilda Williams, Simil, Hector, Rose-Marie Desruisseau and others also taught there.

1959 : Gérard Valcin, Bernard Séjouné, Antoine Obin and Pierre-Joseph Valcin came to the Art Center. Foundation of the Fine Arts Academy in Port-au-Prince. Tiga founded the first ceramics museum. The ONTRP Contest at the Beau Rivage Hotel. Inauguration of the Carlo Mevs Gallery with an exhibit of the works of Sacha Tebo.

1963 : The birth of a group << Les Jeunes Peintres >> with an exhibit at the Alliance française devoted to the work of eleven Haitian women painters. The foundation of Calfou I with Claudie and Tania Maximilien, Yves Morailles, Bernard Wah, Gigi Wah, Néhémy Jean, Bernard Séjourné and Davertige.   1964 : First exhibit by Jean-Claude Rigaud at the Science Faculty in Haiti. Calfou II followed Calfou I and had a great success. Exhibit by Claudie Maximilien et Bernard Séjourné.

1966 : “World Festival of Black Art” in Dakar, Senegal. Dewitt Peters died after a long illness. The Museum for Haitian Art was created in Saint Peter’s College. Galerie Monnin was opened in Port-au-Prince. After the death of Dewitt Peters, the New Art Center was directed by Francine Murat and Antonio Joseph.

1967 : The exhibit “ Trajectoire” organized by Georges Hector at the Alliance française of Haiti.   1969 : Exhibit at the Brooklyn Museum of New York. Group exhibit called “Image of Haiti”. Carifiesta, the Caribbean Exhibit in Kingston, Jamaica. Néhémy Jean created “ L’Atelier” to exhibit modern art and provide art courses to young artists. An exhibit was held in Oxford and at the Hayward Gallery in London organized by Kurt Backman.

1970 : Haitian art exhibits were held at the Galerie Del Aiete, the La Feluca in Rome, the Museum of Auxerre, the ORTF in France and the Oswald Dortmund Museum. Opening of the Jerusalem Art Gallery in Port-au-Prince. Death of the Dominican artist, Xavier Amiama. The cornerstone was laid in May for the new Museum for Haitian Art in Saint Peter’s College in Port-au-Prince.

1973 : Death of Robert Saint-Brice and Pétion Savain. Commemorative exhibit for the second anniversary of the Museum for Haitian Art of Saint Peter’s College.

1974 : Exhibit at the Hervé Méhu Gallery in Pétion-Ville. The Saint Soleil exhibit in the French Institute of Haiti.

1975 : The “La Cigoane” Festival in Soisson, the Saint Soleil mountain. Exhibit at the Bellas Artes in Mexico. Opening of La Petite Galerie by Marie-José Gardère and Rona Thébaud.

1976 : Competition of the theme “ Governor of the Dew” at the Nader Gallery in Port-au-Prince. Philomé Obin received the distinction of the Order of Honor and Merit of Haiti. Exhibit in homage to Léopold Sédar Senghor at the Museum for Haitian Art on the occasion of his visit to Haiti. First exhibit at the French Institute of Haiti by Jean-Claude Legagneur.

1977 : Group exhibit organized by the Anah in the Dante Alighieri Salon. Inauguration of the Galerie Marassa in Pétion-Ville. The “ Souffle d’Haiti” exhibit by Sheila Isham at the Museum for Haitian Art. Exhibit by Lyonel Laurenceau at the Nader Gallery. Visit by André Malraux to Port-au-Prince and Saint Soleil.

1978 : Exhibit at Toukouleur, New Art Center. 160 Haitian paintings and sculptures were on exhibit in the Brooklyn Museum in New York. The foundev Competition Museum for Haitian Art.

1979 : On the 16th of March , exhibit by Bernard Wah at the Museum for Haitian Art on the theme “Return to the Tree II”. Exhibit in Paris, France, at the Musée de l’Homme in the palais de Chaillot.

1981 : Exhibit on the theme “ Cultural Heritage” organized by Unesco in Paris. Death of Camy Rocher, Céléstin Faustin, and Bernard Wah.

1982 : In March, exhibit by John Colt and Ruth Kjaer at the Museum for Haitian Art.

1983 : Opening in July of the École Nationale des Arts (ENARTS). Inauguration of the Haitian National Institute for Culture and Art (INAHCA) in Port-au-Prince. The French Ambassador presented Pierre Monosiet with the “Palmes Académiques” for Chancellor in honor of a life spent in the service of Haitian Art. Pierre Monosiet died in the same year.

1984 : Exhibit in May for the 40th anniversary of the Art Center with a special showing of the founders’ works. Exhibit at the Museum for Haitian Art entitled “ when Painters Drew”. Eye Care exhibit in Washington, D.C. Foundation of the Association of Afro-American Artists.

1985 : Exhibit in December of the works of Patrick Vilaire, “Sculptures and Drawing”, at the Marassa Gallery presented its 33rd exhibit with the works of Gesner Armand, Sacha Tebo and Alix Roy, while Valcin II exhibited at the French Institute of Haiti and at Fleur Soleil. Lois Maïlou Jones Pierre-Noël and Vergniaud Pierre-Noël at the Museum for Haitian Art. The Monnin Gallery participated in an exhibit in the Café de la Paix in Paris. Exhibit at Marassa Gallery of the UBP (Paris). Death of Descollines Manès, Fabolon Blaise, Saint-Pierre Toussaint, Daniel Taggart (who with his wife Ginette was the great promoter of artistic tapestries from Haiti) as well as of Max Pinchinat in Paris.