The Scopes Trial, commonly referred to as the Scopes Evolution Trial or the Scopes Monkey trial, began on July 10th, 1925. The defendant, John Thomas Scopes, was a high school coach and substitute teacher who had been charged with violating the Butler Act by teaching the theory of evolution in his classes. The Butler Act forbid the teaching of any theory that denied the biblical story of Creationism. By teaching that man had descended from apes, the theory of evolution, Scopes was charged with breaking the law.

John Thomas Scopes came to Tennessee fresh out of college. In the spring of 1925, he had just completed his first year as science teacher and part-time football coach at the high school in the little town of Dayton. Scopes planned to return home to Kentucky for the summer. But in his words, "a beautiful blonde" distracted him and he stayed for another week hoping for a date. The decision changed his life forever.

It all began when the state of Tennessee passed a law making it a crime to teach evolution in public schools. A new organization called the American Civil Liberties Union responded immediately. The ACLU placed an ad inviting a teacher to help test the law in the courts. Dayton was in an economic slump, and the town's movers and shakers thought a sensational trial would put Dayton "on the map." 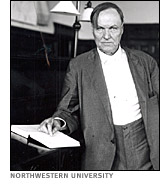 In 1925, when he volunteered to defend John Scopes' right to teach evolution.

Clarence Darrow grew up in an unconventional household. His father was a carpenter and part-time undertaker in the little town of Kinsman, Ohio. He was also an atheist. "The fact that my father was a heretic always put him on the defensive," Darrow later wrote. "We children thought it was only right and loyal that we should defend his cause."

The famous 1925 trial of John Scopes in Dayton Tennessee became known as the "Monkey Trial". John Scopes was arrested for teaching evolution. This breached the Tennessee anti-evolution law known as the Butler Act. The trial itself received national attention as it was not only one of the first ever court cases which was broadcast live on radio but pitted famous lawyer, Clarence Darrow against past presidential 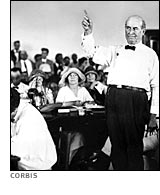 The Scopes Trial is one of the best known in American history because it symbolizes the conflict between science and theology, faith and reason, individual liberty and majority rule. The object of intense publicity, the trial was seen as a clash between urban sophistication and rural fundamentalism. The trial was further popularized by the 1955 play,Inherit the Wind, which became a hit film in 1960. The play and subsequent movie cast the trial as a struggle for truth and freedom against repression and ignorance.

In the summer of 1925, a young schoolteacher named John Scopes stood trial in Dayton, Tennessee, for violating the state law against the teaching of evolution. Two of the country's most famous attorneys faced off in the trial. William Jennings Bryan, 65 years old and a three time Democratic presidential nominee, prosecuted; 67-year-old Clarence Darrow, who was a staunch agnostic and who had defended Nathan Leopold and Richard Loeb the year before, represented the defense. Bryan declared that "the contest between evolution and Christianity is a duel to the death."

The five-year-old American Civil Liberties Union had taken out newspaper advertisements offering to defend anyone who flouted the Tennessee law. George Rappelyea, a Dayton, Tenn., booster, realized that the town would get enormous attention if a local teacher was arrested for teaching evolution. He enlisted John Scopes, a science teacher and football coach, who arranged to teach from George Hunter's Civic Biology, a high school textbook promoting Charles Darwin's arguments in The Descent of Man.

The trial was marked by hoopla and a carnival-like atmosphere. Thousands of people swelled the town of a thousand. For 12 days in July, 1925, 100 reporters sent dispatches.

The trial judge had prohibited the defense from using scientists as witnesses. So, on the trial's seventh day, the defense team called Bryan to testify as an expert on the Bible. Darrow subjected Bryan to a withering cross-examination. He got Bryan to say that Creation was not completed in a week, but over a period of time that "might have continued for millions of years."

The play, Inherit the Wind, would caricature Bryan as a Bible-thumping buffoon, but in actuality, Bryan's position was complex. He opposed the mandated teaching of evolution in public schools because he thought the people should exercise local control over school curricula. He also opposed Darwin's theory of evolution by natural selection because these ideas had been used to defend laissez-faire capitalism on the grounds that a perfectly free market promotes the "survival of the fittest." As early as 1904, Bryan had denounced social Darwinism as "the merciless law by which the strong crowd out and kill off the weak."

In addition, Bryan opposed Darwinism as justification for war and imperialism. In The Descent of Man, Darwin has argued that "at some future period, not very distant as measured by centuries, the civilized races of man will almost certainly exterminate and replace the savage races." The textbook that Scopes taught from, Civic Biology, identified five "races of man": Ethiopian, Malay, American Indian, and Mongolian, and "finally, the highest type of all, the Caucasians, represented by the civilized white inhabitants of Europe and America." Bryan was also unhappy with Darwin's assumption that the entire evolutionary process was purposeless and not the product of a larger design.

Not a Biblical literalist, Bryan was aware of serious scientific difficulties with Darwinism, such as Darwin's theory that slight, random variations were enough to generate life from non-life to produce a vast array of biological species. But Bryan mistook the lack of consensus about the mechanisms that Darwin advanced to explain the evolutionary process for a lack of scientific support for the concept of evolution itself.

The day after this exchange, Darrow changed his client's plea to guilty. Scopes was convicted and fined $100. However, the conviction was thrown out on a technicality by the Tennessee Supreme Court: that the judge, and not the jury, had determined the $100 fine. In 1967, the Supreme Court struck down Tennessee's anti-evolution law for violating the Constitution's prohibition against the establishment of religion.

Five days after the trial's conclusion, Bryan died of apoplexy. The journalist H.L. Mencken wrote of Bryan: "He came into life a hero, a Galahad, in bright and shining armor. He was passing out a poor mountebank." As for Scopes, he left teaching and became a chemical engineer in the oil industry. He died at age 70 in 1970.

The Scopes trial resulted in two enduring conclusions: that legislatures should not restrain the freedom of scientific inquiry, and that society should respect academic freedom.