Plaintiffs: Cherokee Indian Nation
Defendant: State of Georgia
Plaintiffs Claim: That under the Supreme Court's power to resolve disputes between states and foreign nations, the Court could forbid Georgia from unlawfully attempting to move the Cherokees from their lands
Chief Defense Lawyer: None
Chief Lawyer for Plaintiffs: William Wirt
Justices: Henry Baldwin, Gabriel Duvalt, William Johnson, John Marshall, John McLean, Joseph Story, and Smith Thompson
Place: Washington, D.C.
Date of Decision: March 5, 1831
Decision: That the Court had no power to hear the dispute, because Indian tribes are not foreign nations

SIGNIFICANCE: By refusing to help the Cherokees, the U.S. Supreme Court left the Indians at the mercy of land-hungry settlers. The Cherokees ultimately were forced to move to Oklahoma along the famous "Trail of Tears."
http://law.jrank.org/pages/2452/Cherokee-Nation-v-Georgia-1831.html#ixzz40Y0Jk882 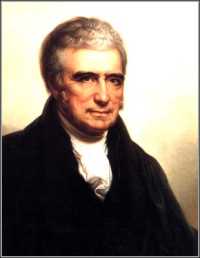 Mr. Chief Justice Marshall delivered the opinion of the Court:

This bill is brought by the Cherokee Nation, praying an injunction to restrain the state of Georgia from the execution of certain laws of that state, which as is alleged, go directly to annihilate the Cherokees as a political society, and to seize, for the use of Georgia, the lands of the nation which have been assured to them by the United States in solemn treaties repeatedly made and still in force.

If courts were permitted to indulge their sympathies, a case better calculated to excite them can scarcely be imagined. A people once numerous, powerful, and truly independent, found by our ancestors in the quiet and uncontrolled possession of an ample domain, gradually sinking beneath our superior policy, our arts, and our arms, have yielded their lands by successive treaties, each of which contains a solemn guarantee of the residue, until they retain no more of their formerly extensive territory than is deemed necessary to their comfortable subsistence. To preserve this remnant the present application is made.

Before we can look into the merits of the case, a preliminary inquiry presents itself. Has this Court jurisdiction of the cause?

The 3rd Article of the Constitution describes the extent of the judicial power. The 2nd Section closes an enumeration of the cases to which it is extended, with controversies between a state or the citizens thereof, and foreign states, citizens, or subjects. A subsequent clause of the same section gives the Supreme Court original jurisdiction in all cases in which a state shall be a party. The party defendant may then unquestionably be sued in this Court. May the plaintiff sue in it? Is the Cherokee Nation a foreign state in the sense in which that term is used in the Constitution?

The counsel for the plaintiffs have maintained the affirmative of this proposition with great earnestness and ability. So much of the argument as was intended to prove the character of the Cherokees as a state, as a distinct political society separated from others, capable of managing its own affairs and governing itself, has, in the opinion of a majority of the judges, been completely successful. They have been uniformly treated as a state from the settlement of our country. The numerous treaties made with them by the United States recognize them as a people capable of maintaining the relations of peace and war, of being responsible in their political character for any violation of their engagements, or for any aggression committed on the citizens of the United States by any individual of their community. Laws have been enacted in the spirit of these treaties. The acts of our government plainly recognize the Cherokee Nation as a state, and the courts are bound by those acts.

A question of much more difficulty remains. Do the Cherokees constitute a foreign state in the sense of the Constitution?

The counsel have shown conclusively that they are not a state of the Union, and have insisted that individually they are aliens, not owing allegiance to the United States. An aggregate of aliens composing a state must, they say, be a foreign state. Each individual being foreign, the whole must be foreign.

This argument is imposing, but we must examine it more closely before we yield to it. The condition of the Indians in relation to the United States is perhaps unlike that of any other two people in existence. In the general, nations not owing a common allegiance are foreign to each other. The term foreign nation is, with strict propriety, applicable by either to the other. But the relation of the Indians to the United States is marked by peculiar and cardinal distinctions which exist nowhere else.

The Indian Territory is admitted to compose part of the United States. In all our maps, geographical treatises, histories, and laws, it is so considered. In all our intercourse with foreign nations, in our commercial regulations, in any attempt at intercourse between Indians and foreign nations, they are considered as within the jurisdictional limits of the United States, subject to many of those restraints which are imposed upon our own citizens. They acknowledge themselves in their treaties to be under the protection of the United States; they admit that the United States shall have the sole and exclusive right of regulating the trade with them and managing all their affairs as they think proper; and the Cherokees in particular were allowed by the Treaty of Hopewell, which preceded the Constitution, to send a deputy of their choice, whenever they think fit, to Congress. Treaties were made with some tribes by the state of New York under a then unsettled construction of the Confederation, by which they ceded all their lands to that state, taking back a limited grant to themselves in which they admit their dependence.

Though the Indians are acknowledged to have an unquestionable and, heretofore, unquestioned right to the lands they occupy until that right shall be extinguished by a voluntary cession to our government, yet it may well be doubted whether those tribes which reside within the acknowledged boundaries of the United States can, with strict accuracy, be denominated foreign nations. They may more correctly, perhaps, be denominated domestic dependent nations. They occupy a territory to which we assert a title independent of their will, which must take effect in point of possession when their right of possession ceases. Meanwhile, they are in a state of pupilage. Their relation to the United States resembles that of a ward to his guardian.

They look to our government for protection; rely upon its kindness and its power; appeal to it for relief to their wants; and address the President as their great father. They and their country are considered by foreign nations, as well as by ourselves, as being so completely under the sovereignty and dominion of the United States that any attempt to acquire their lands or to form a political connection with them would be considered by all as an invasion of our territory and an act of hostility.

These considerations go far to support the opinion that the framers of our Constitution had not the Indian tribes in view when they opened the courts of the Union to controversies between a state or the citizens thereof and foreign states.

In considering this subject, the habits and usages of the Indians in their intercourse with their white neighbors ought not to be entirely disregarded. At the time the Constitution was framed, the idea of appealing to an American court of justice for an assertion of right or a redress of wrong had perhaps never entered the mind of an Indian or of his tribe. Their appeal was to the tomahawk, or to the government. This was well understood by the statesmen who framed the Constitution of the United States, and might furnish some reason for omitting to enumerate them among the parties who might sue in the courts of the Union. Be this as it may, the peculiar relations between the United States and the Indians occupying our territory are such that we should feel much difficulty in considering them as designated by the term foreign state were there no other part of the Constitution which might shed light on the meaning of these words. But we think that in construing them, considerable aid is furnished by that clause in the 8th Section of the 3rd Article, which empowers Congress to regulate commerce with foreign nations, and among the several states, and with the Indian tribes.

In this clause they are as clearly contradistinguished by a name appropriate to themselves from foreign nations as from the several states composing the Union. They are designated by a distinct appellation; and as this appellation can be applied to neither of the others, neither can the appellation distinguishing either of the others be in fair construction applied to them. The objects to which the power of regulating commerce might be directed are divided into three distinct classes: foreign nations, the several states, and Indian tribes. When forming this article, the Convention considered them as entirely distinct. We cannot assume that the distinction was lost in framing a subsequent article, unless there be something in its language to authorize the assumption.

Foreign nations is a general term, the application of which to Indian tribes, when used in the American Constitution, is at best extremely questionable. In one article in which a power is given to be exercised in regard to foreign nations generally, and to the Indian tribes particularly, they are mentioned as separate in terms clearly contradistinguishing them from each other. We perceive plainly that the Constitution in this article does not comprehend Indian tribes in the general term foreign nations; not, we presume, because a tribe may not be a nation but because it is not foreign to the United States. When, afterward, the term foreign state is introduced, we cannot impute to the Convention the intention to desert its former meaning and to comprehend Indian tribes within it, unless the context force that construction on us. We find nothing in the context and nothing in the subject of the article which leads to it.

The Court has bestowed its best attention on this question and, after mature deliberation, the majority is of opinion that an Indian tribe or nation within the United States is not a foreign state in the sense of the Constitution, and cannot maintain an action in the courts of the United States.

A serious additional objection exists to the jurisdiction of the Court. Is the matter of the bill the proper subject for judicial inquiry and decision? It seeks to restrain a state from the forcible exercise of legislative power over a neighboring people, asserting their independence; their right to which the state denies. On several of the matters alleged in the bill, for example on the laws making it criminal to exercise the usual powers of self-government in their own country by the Cherokee Nation, this Court cannot interpose, at least in the form in which those matters are presented.

That part of the bill which respects the land occupied by the Indians, and prays the aid of the Court to protect their possession, may be more doubtful. The mere question of right might perhaps be decided by this Court in a proper case with proper parties. But the Court is asked to do more than decide on the title. The bill requires us to control the legislature of Georgia, and to restrain the exertion of its physical force. The propriety of such an interposition by the Court may be well questioned. It savors too much of the exercise of political power to be within the proper province of the Judicial Department But the opinion on the point respecting parties makes it unnecessary to decide this question.

The motion for an injunction is denied.